Glass has been gaining importance as a building material in modern architecture for years. It is important to build transparent, light-filled and generous. For birds, these glass surfaces are often a deadly trap. NABU estimates that every year in Germany about 100 million birds are killed by collisions with panes of glass.

This is because birds do not recognise them as obstacles, but only see the reflections of the surroundings, which simulate the sky or vegetation. Thus, glazing repeatedly blocks an apparently free flight path, such as glazed patio doors or façades, windows around corners or sunrooms.

This was also recognized by the NABU nature conservation officer in Eichstetten. In recent years, the glass pavilion of the railway station has repeatedly become a deadly danger for birds. To protect the birds, the municipality of Eichstetten decided to apply the SEEN Elements (see PDF at the end of the article).

The 9mm dots, which are placed at a distance of 90mm from each other, can not only be used in new glass surfaces, but also on existing ones. In contrast to new glass elements of a building, where the SEEN Elements are placed between the panes, they are applied to the surface of existing glass facades afterwards. In both applications, the grid covers less than 1% of the entire glass surface. In addition, the metallic front and the light-absorbing, neutral back of the SEEN Elements reduce the interference for the human eye to a minimum. This preserves the architectural effect of glazing. Thanks to the flexible manufacturing process, the bird protection grid can be easily combined with denser privacy or thermal protection grids or individual designs.

The SEEN Elements were subjected to extensive scientific testing in 2019 and 2020. In the flight channel of the Biological Station Hohenau-Ringelsdorf in Austria, the extent to which birds recognise the marked discs and turn away was tested. “Our product has proven to be highly effective, meaning that more than 90% of the birds recognise the pane as an obstacle. We are pleased that we can make a real contribution to species protection!” – says Rouven Seidler, Managing Director of SEEN AG.

Due to the simple application, the retrofitting of existing panes is also possible for private individuals. In contrast to many other products, there is no need for full-surface, bubble-free bonding of the glass surface. The SEEN Elements are applied by means of handy carrier films. After the carrier film has been removed, only the individual 9mm dots remain. They are suitable for glazed windows and doors, sunrooms or other floor-to-ceiling windows. Glass façades, glazed entrance areas, as well as light and inner courtyards can also be effectively protected against bird strike. 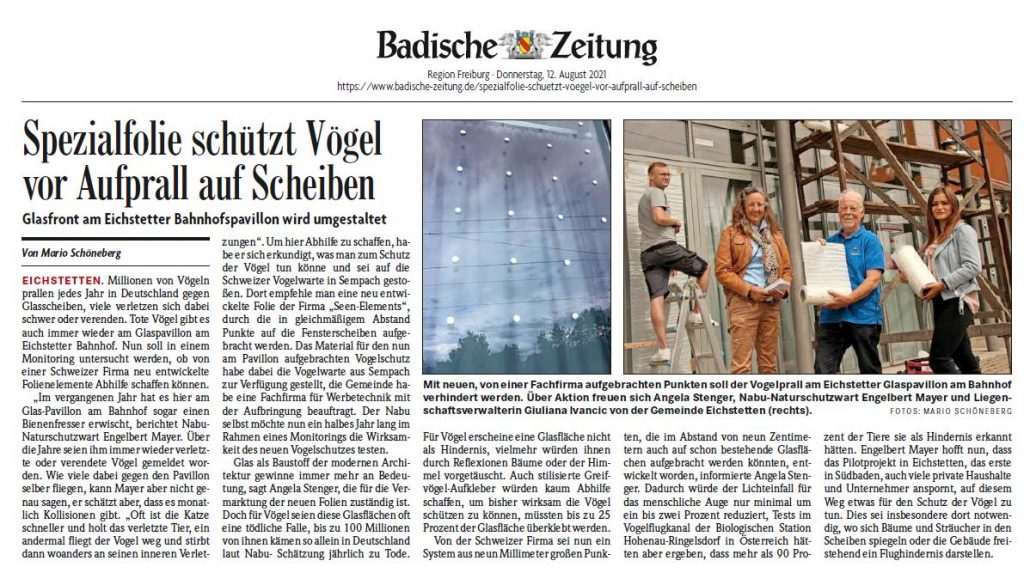 The protection of birds is becoming more and more important. While buildings are getting bigger and brighter, the danger of bird strikes on glass panes is growing. The SEEN Elements offer an effective and at the same time creative possibility to counteract this.

The cooperation between SEEN AG and Eastman will support glass processors, facade designers, and architects in making a valuable contribution to bird protection in the construction industry. This, without neglecting the use of design glass. In addition, both companies will be able to consolidate and expand their market position at the same time.

In setting up production, SEEN AG will receive technical support from Eastman, which guarantees one hundred percent correct handling of the PVB film. There is also mutual support in the long-term tests of the glass to be used and the associated approvals. SEEN AG is pleased to announce this cooperation.

The SEEN Elements provide a unique new way to modify glass. The elements, which are metallically coated on one or both sides, are freely selectable in shape, size, color, and placement. Laminating foils or transparent carrier foils are used for the application.

Glass particularly increases the risk of bird strike. Transparency is a particular problem when a pane of glass is in an apparently free flight path. This happens, for example, on glazing over corners. The reflection in the glass front can also confuse birds if it reflects the surrounding nature.

Studies from the United States have shown that there are estimated two bird strikes per family home per year. Thus, significantly more birds die from larger buildings. The collision with the glass surface is at the top of the list of causes for the death of native species and migratory birds.

In previous tests, the SEEN Elements proved to be extremely effective and at the same time beneficial. A minimum coverage of less than one percent of the glass surface already ensures a classification as highly effective bird protection. This is also a product that does not have to be positioned on level 1 and therefore leaves the glass surface untouched and is protected in the composite. Here you can find the complete test report of the test trials according to the new WIN test method.

The Zak World of Façades conference series was launched in 2012. Since then it has developed into a globally recognized event that brings together new concepts, best practices, and current trends in the building envelope segment in one place. It has already hosted 75 events in 25 countries. Seven additional countries are planned for 2020. SEEN AG is taking part as well!

Last year we already participated in the Zak World of Façades as exhibitors in Berlin, London and Stockholm. Due to the success of the event, we also planned to be present in various cities this year.

SEEN AG at the Zak World of Façades

Due to the current situation, however, the festival has been moved to digital space in 2020: More than 4,000 participants from all over the world will register on a single virtual platform and exchange information with each other. New trends and technologies are not to be missed. For almost three months, keynote presentations, virtual workshops, panel discussions, and open tête-à-tête chats will be available.

From 01. to 31. October we will present our products and exciting projects. On our company profile, you will find comprehensive information about the products of SEEN AG. Our focus is on our SEEN Elements, thin stones, acrylic glass, and metallic coatings.

We are looking forward to old acquaintances, new contacts, and many impressions!

In the field of metal coatings and 3D printing, SEEN AG is now cooperating with BASF Forward AM. Our partner develops the appropriate material for 3D printing and provides different designs. The metal coatings are available in 24K gold, aluminum, or ITO (indium tin oxide).

3D printing of SEEN AG is mainly used in lightweight construction. We support especially when production is very cost-intensive due to small quantities or many different shapes made of solid metal. Thanks to 3D printing, we are able to combine many small elements into one larger one without any problems. The coating process of SEEN AG ensures an even and homogeneous metallic coating.

Even the 24K gold and aluminum are applied 100% homogeneously to the plastic 3D print. While these two metals are used more for architectural aesthetics, the mixed oxide ITO has many other advantages. Indium tin oxide is a semiconducting, translucent, and almost transparent material. For example, it is also used for touch screens and thin-film solar cells. But ITO also finds its place in architecture, especially for heated windows.

BASF Forward AM is part of BASF SE and offers solutions in 3D printing along the entire value chain of additive manufacturing. The company is characterized on the one hand by many years of experience and on the other hand by its exceptional innovative spirit.

We are pleased about the new cooperation in the field of 3D printing and metal coatings. With Additive Manufacturing we open new doors to many new possibilities in industrial design, architecture, and interior design.

We use cookies on our website to give you the most relevant experience by remembering your preferences and repeat visits. By clicking “Accept”, you consent to the use of ALL the cookies.
Cookie settingsACCEPT
Manage consent

This website uses cookies to improve your experience while you navigate through the website. Out of these, the cookies that are categorized as necessary are stored on your browser as they are essential for the working of basic functionalities of the website. We also use third-party cookies that help us analyze and understand how you use this website. These cookies will be stored in your browser only with your consent. You also have the option to opt-out of these cookies. But opting out of some of these cookies may affect your browsing experience.
Necessary Always Enabled
Necessary cookies are absolutely essential for the website to function properly. These cookies ensure basic functionalities and security features of the website, anonymously.
Functional
Functional cookies help to perform certain functionalities like sharing the content of the website on social media platforms, collect feedbacks, and other third-party features.
Performance
Performance cookies are used to understand and analyze the key performance indexes of the website which helps in delivering a better user experience for the visitors.
Analytics
Analytical cookies are used to understand how visitors interact with the website. These cookies help provide information on metrics the number of visitors, bounce rate, traffic source, etc.
Advertisement
Advertisement cookies are used to provide visitors with relevant ads and marketing campaigns. These cookies track visitors across websites and collect information to provide customized ads.
Others
Other uncategorized cookies are those that are being analyzed and have not been classified into a category as yet.
SAVE & ACCEPT
Powered by